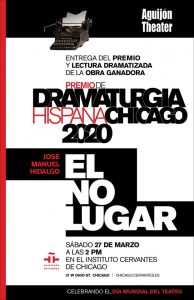 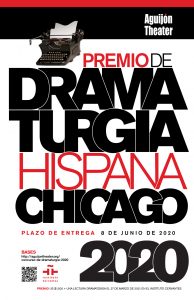 The Cervantes Institute is the public entity created by Spain in 1991 to promote Spanish and the co-official languages ​​of Spain and to spread the culture of Spanish-speaking countries. It is present in almost 70 cities in 40 countries on five continents and is the reference organization worldwide for the training of teachers of Spanish as a foreign language. | Instituto Cervantes is an institution founded by Spain in 1991 to teach and promote the language and culture of Spain as well as the coofficial languages ​​of Spain and the Hispanic-speaking countries. The Instituto Cervantes is present in almost over 70 cities from 40 countries spread out in the five continents and is the organization of reference around the world for the teaching training of Spanish as a second language.

Aguijón Theater Company of Chicago, faithful to its spirit of dissemination of theater of Hispanic origin within the United States and of promotion of contemporary scenic writings, with the purpose of establishing a dialogue between authors and creators, in their search for a genuine discourse. and exploration of new trends in the theatrical discipline, in collaboration with the Cervantes Institute of Chicago, convenes the fourth edition of the Chicago Hispanic Dramaturgy Award 2020, which will be governed by the following:

All playwrights and all playwrights of Hispanic origin, resident or not in the United States, may participate. A free-style play, written in Spanish, in a free style, that is related to current social problems, will be in competition. Of extension not less than 50 pages nor more than 60 (Letter size, Times New Roman font, 12 points, double-spaced). The works presented must not have been published or represented or made known by any of the currently known technological means, nor must they have obtained prizes in competitions prior to the date on which the jury’s decision is made public. The originals will be sent via email to the address dramaturgia@aguijontheater.org, in a PDF document called “Work”, duly foliated, where it appears on the first page, along with the title, a pseudonym instead of the author’s name. In a separate PDF document called “Escrow”, in the same email, this pseudonym will be included as well as the personal and location data, a brief biographical file of the author and a copy of his identity document. The period for admission of originals opens from the date of publication of this call and expires on June 8, 2020. Between the months of July to December 2020, a jury appointed by the management of Aguijón Theater and Instituto Cervantes will evaluate the works presented and will make its verdict public on December 31, 2020. The Prize will consist of $ 1,500.00 USD. And a public dramatized reading of the winning play by the cast of Aguijón Theater, in the auditorium of the Instituto Cervantes on March 27, 2021, during our season (32) 2020/2021. The award may be declared shared but not void. No member of the organizing institutions may compete. Participation in the Prize implies acceptance of these rules.