Aguijón Theater Company of Chicago is an independent theater company founded in 1989 by actress/director Rosario Vargas, and established and incorporated as a nonprofit 501 (c) (3) organization on 22 August 1990. The board was established and expanded from August to December 1990. In 1992, Marcela Muñoz became an integral member of Aguijón Theater, transforming its structure with her vision and strong commitment. In 2008, Marcela joined Rosario as Aguijón’s Co-Artistic Director.

One afternoon in August 1989 at the house located on 4318 Central Street Park in Chicago, (the official address of the beginnings) Augusto Yanacopulos, Rosario Vargas, María Teresa Ayala and María Vargas, discussed the project of establishing a theater company in Chicago whose main objective was to produce theater in Spanish. Its mission would be to explore the social problems that affect the Latino community in the United States. Artists from different disciplines would share their talents, and new and old generations of Latino immigrants would see represented, in their own language, their experiences and achievements. They brainstormed a name and chose Aguijón II, because Rosario Vargas had founded another group in her native Colombia with the name Aguijón. Aguijón means “stinger” and it denoted the company’s commitment to stimulate and prick the social conscience of the audience. It was in the mid 70’s and early 80’s in Colombia as well as here, that times of rapid change and political turmoil were taking place. The plays they presented were deeply social and pro-workers’ rights. As in the original Aguijón, the mission of this new company would be similar, with Spanish as the language to present their work. Aguijón II was the name by which the company was known in its early years and later in 2000, it was amended by deleting the Roman numeral, and since then the company has been called Aguijón Theater of Chicago.

The first play that the company presented was “Homage to Sor Juana Inés de la Cruz,” a show created and directed by Rosario Vargas and inspired by the “Eternal Feminine” by Rosario Castellanos. It was presented at the National Museum of Mexican Art (formerly the Mexican Fine Arts Center Museum) in 1990; then in 1994 at the Festival “Sor Juana Inés de la Cruz.” Its classic theme was well received by the public. The cast included two teenage actresses, Marcela Muñoz and Gloria García, and violinist Maruca Helguera, all of them very young artists. Other productions include: “Orchids in the Moonlight” by Carlos Fuentes, premiered at the National Museum of Mexican Art in 1991, and presented again at the University of Chicago in 1992 as part of the Conference “Crossing Borders , Creating Spaces: Mexican and Chicana Women 1848-1992 “; “Kinsey Report”, a single actor performance inspired by the poem of the same name by Rosario Castellanos, with the acting and direction of Rosario Vargas, who inaugurated the new auditorium of the Harold Washington Library on October 14, 1991. In 1994 Aguijón presented its first play with simultaneous translation: “La Chunga” by Mario Vargas Llosa, which was well received by the audience. And since then the productions have been presented in both languages, either with simultaneous translation, bilingually or with supertitles, as it’s currently done. 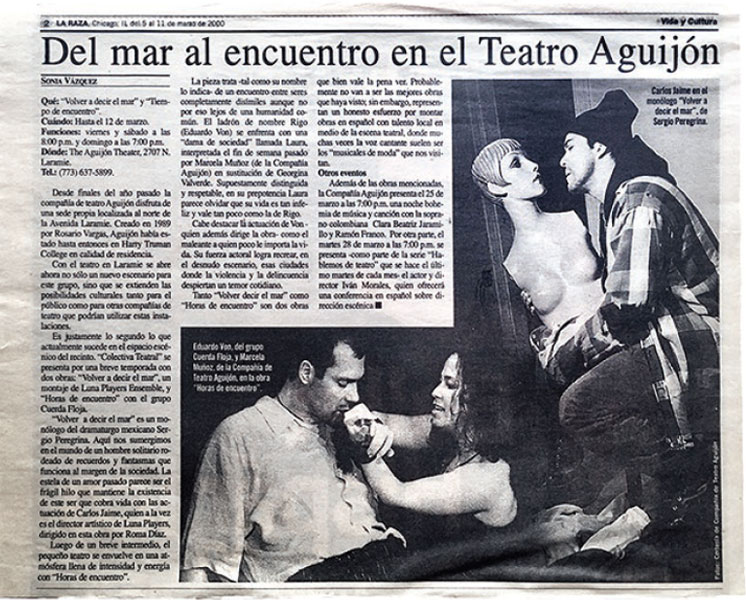 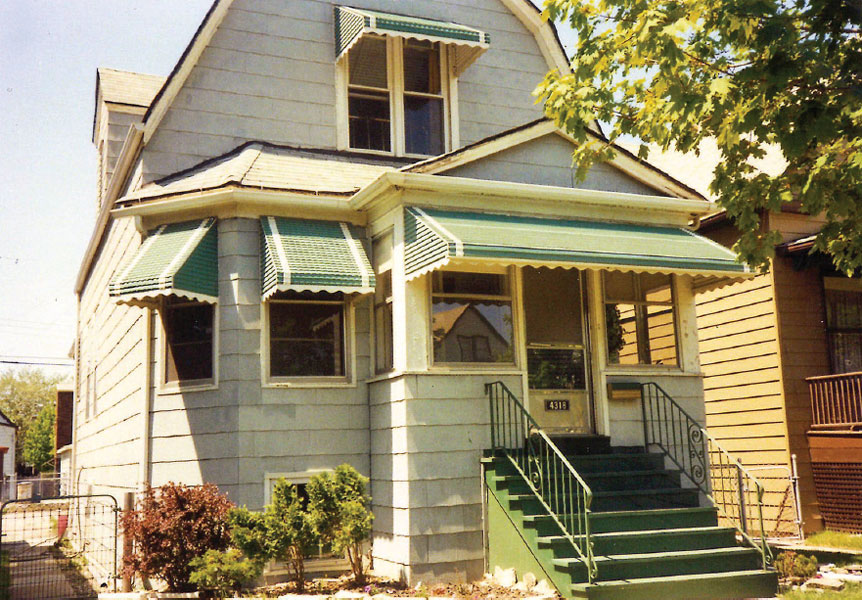 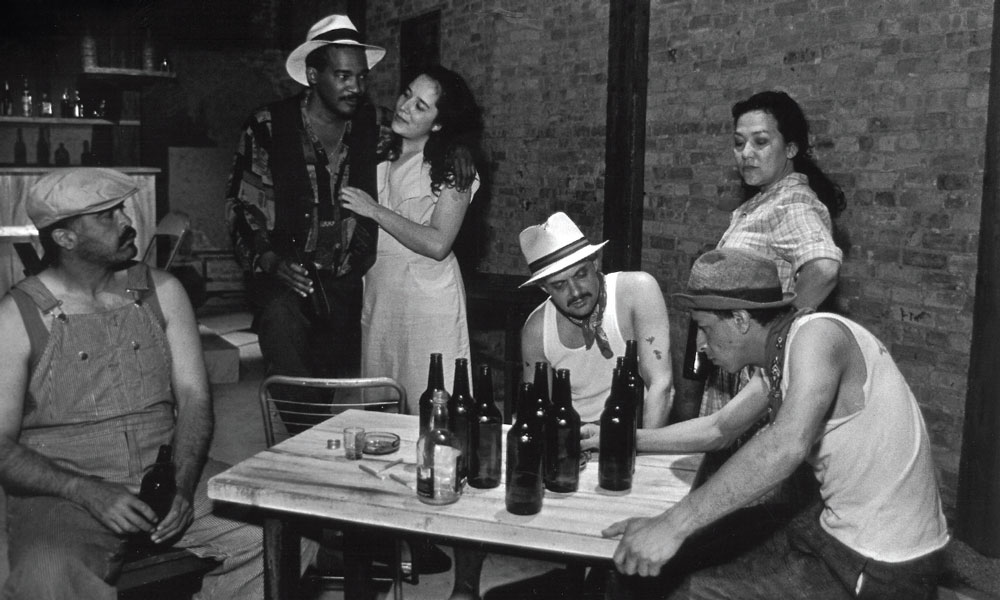 Until 1999, Aguijón had its headquarters at Truman College (1145 W. Wilson, Chicago) in the Uptown neighborhood, thanks to the agreement reached between Madeline Román-Vargas, Dr. María Vargas and Dr. Ruth Burgos-Sasscer, then President of Truman College. The company operated as a traveling theater, bringing their productions to different schools, libraries and community centers across the city and surrounding suburbs (The Museum of Fine Mexican Arts Center, the St. Pius Church, Ruiz Belvis Cultural Center, Museum Science and Industry, Café Teatro Batey, La Décima Musa, Rudy Lozano Library, Harold Washington Library, Chicago Cultural Center, DePauw University, Dominican University, Purdue University, St. Augustine College, to name a few). In this way the company could present their work to different audiences that would otherwise not have access to the theater. And from those old nomadic days it created an audience that, now that Aguijón has its own locale, come from all over the city to see its shows.

In the spring of 1999, Augusto Yanacopulos and Rosario Vargas bought an old building in the northwest side of Chicago in order to donate it as a home to the company. That summer, with the help of Marcela Muñoz, Keith Werner, Juan Ramírez, Gregorio Gómez and José Arturo Burgos worked to adapt it as a theater. In December 1999, Aguijón opened the doors of its own home at 2707 North Laramie Avenue in the Belmont-Cragin neighborhood of Chicago. Aguijón is proud to serve this community in which, even though Spanish is one of the most spoken languages and Latinos are the majority (65%), access to the arts was scarce and programs in Spanish were nonexistent before the company moved to the area. In the years that Aguijón has been part of the neighborhood, the local audience and residents’ support has increased.

Through its years of existence and through its refined and hard work, Aguijón Theater has established itself as one of the best known and respected companies, not only in the Latino community, but in Chicago and the U.S. The company remains active with three annual productions, besides presenting concerts, recitals, workshops, book signings, among other events.

Aguijón has received local and international recognition. In 2003, Aguijón participated in the First Latino Theatre Festival at the Goodman Theatre with its acclaimed play “The House of Bernarda Alba” by Federico García Lorca. Aguijón was the only company that presented in Spanish and opened the festival with a sold out box office. The audience received the play with a standing ovation. In 2004, Aguijón was again invited to participate in this festival with their production “Blood Wedding” by Federico García Lorca also, again getting great reviews. In November 2004, Aguijón was invited to participate in the V International Encounter “Masks of Time”, the most important theater festival in southern Peru, which takes place in Arequipa, and the V Latin American Festival of Cusco Theatre in Cusco. The company presented this time “Perversions,” a farce about war by playwrights José Castro Urioste and Eduardo Cabrera, and also presented Lorca!, a music, dance and theater show through the poetry of Federico Garcia Lorca, highly acclaimed by the press. In September and October 2005, Aguijón returned to those festivals in Peru Peru and continued with the I International Lorca’s Theatre Summit, sponsored by the General Sarmiento National University in San Miguel, Argentina with its production “The House of Bernarda Alba.” In 2006, Aguijón performed “Yerma” at the III Goodman Latino Theatre Festival, completing the Lorca’s trilogy. 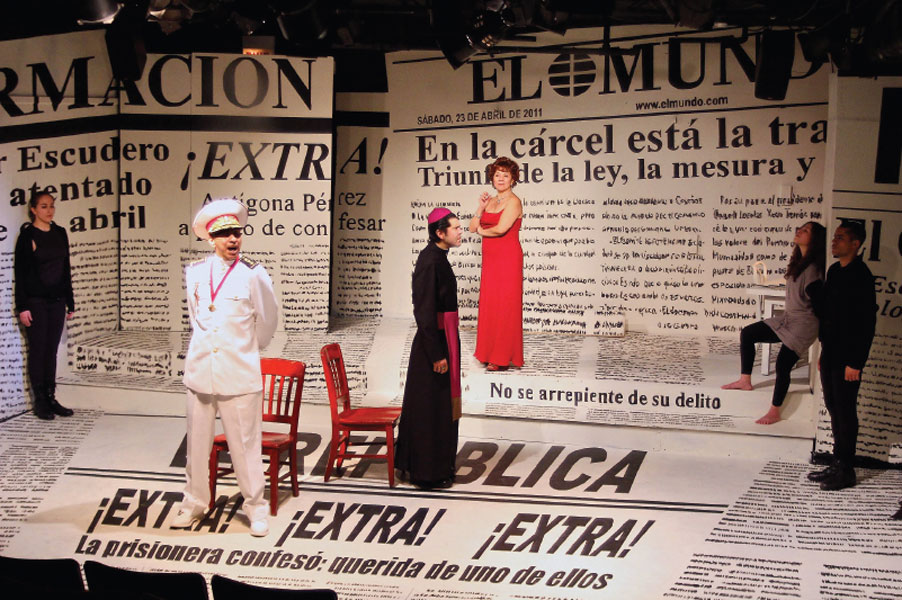 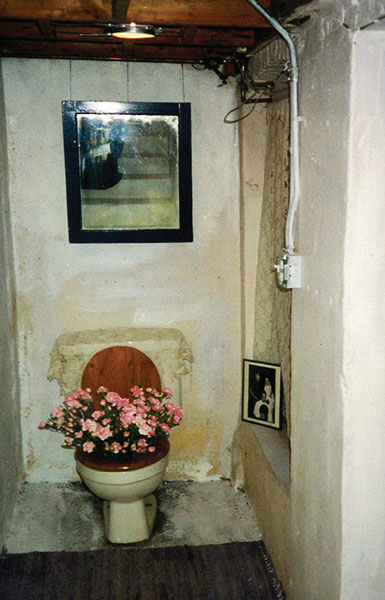 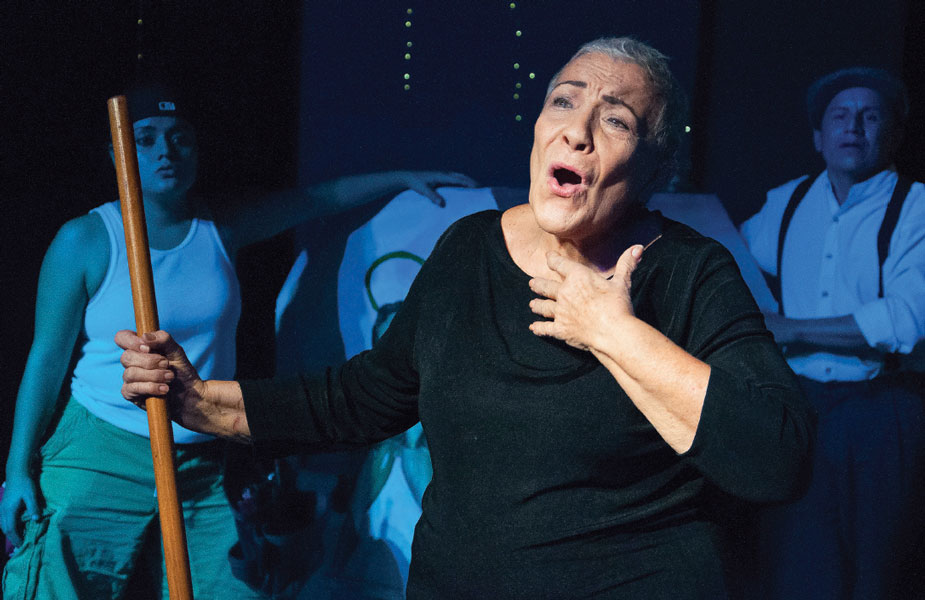 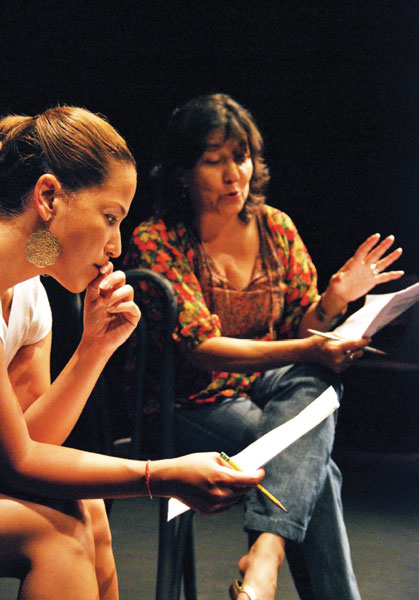 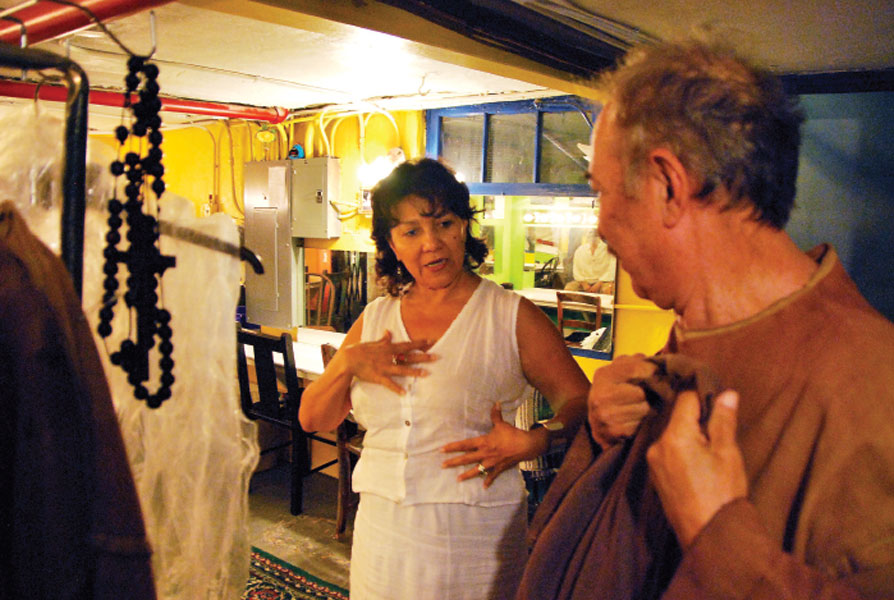 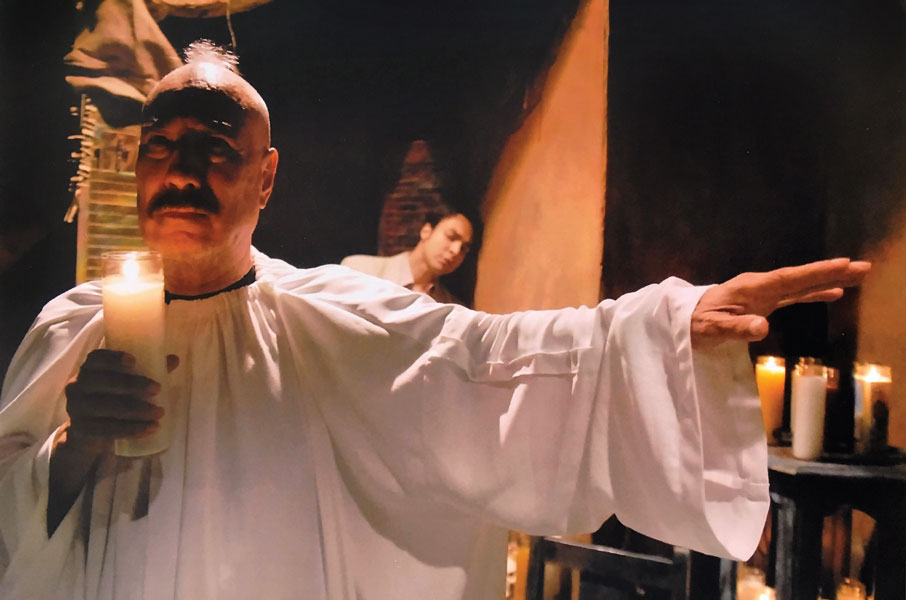 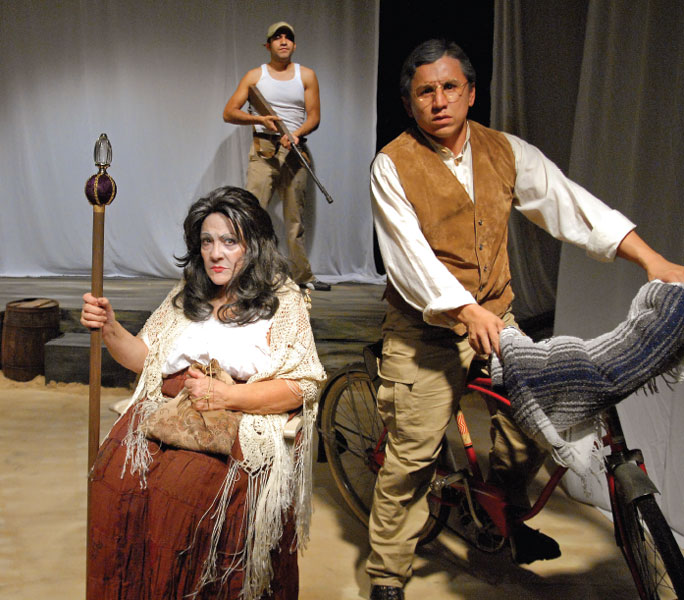 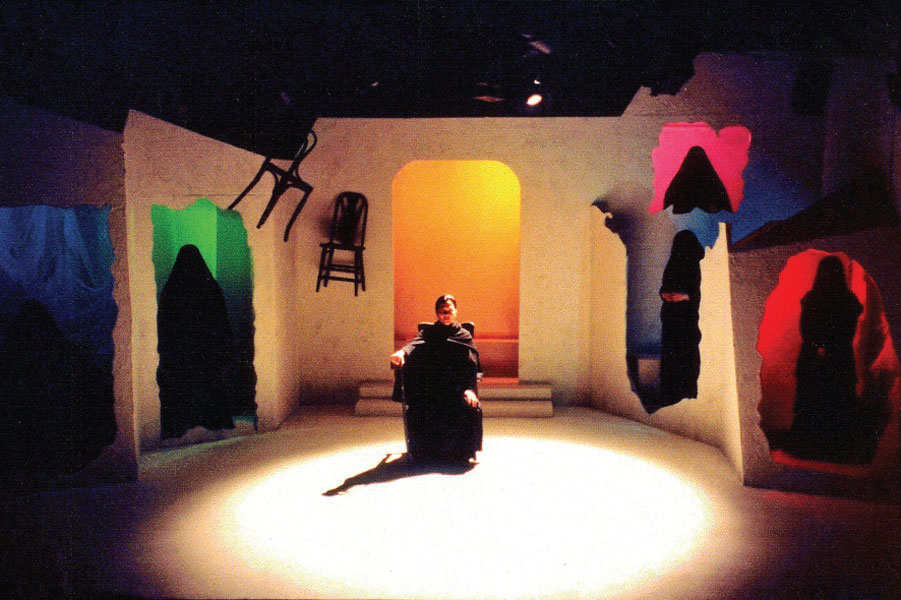 Until 1999, Aguijón had its headquarters at Truman College (1145 W. Wilson, Chicago) in the Uptown neighborhood, thanks to the agreement reached between Madeline Román-Vargas, Dr. María Vargas and Dr. Ruth Burgos-Sasscer, then President of Truman College. The company operated as a traveling theater, bringing their productions to different schools, libraries and community centers across the city and surrounding suburbs (The Museum of Fine Mexican Arts Center, the St. Pius Church, Ruiz Belvis Cultural Center, Museum Science and Industry, Café Teatro Batey, La Décima Musa, Rudy Lozano Library, Harold Washington Library, Chicago Cultural Center, DePauw University, Dominican University, Purdue University, St. Augustine College, to name a few). In this way the company could present their work to different audiences that would otherwise not have access to the theater. And from those old nomadic days it created an audience that, now that Aguijón has its own locale, come from all over the city to see its shows.

For the 2008/2009 season, Aguijón decided to explore the Latino experience through the American theater classics, whom at their time shaped the struggle of certain marginalized groups (European immigrants during the Great Depression, African Americans, middle-class workers, etc. ) in their works. An invitation was extended to Latino writers living in the United States, to create entirely new works inspired on those plays. The first result of a close collaboration between the director Marcela Muñoz and the Mexican writer, Raúl Dorantes was “Even the Sparrows Leave their Nest,” a play inspired by “The Strangest Kind of Romance” (1942), by the famous American playwright Tennessee Williams. In this work, Raúl Dorantes illustrates the obstacles that many undocumented immigrants face when trying to build their lives abroad: racism, loneliness and fear of uprooting. The play had its world premiere in August 2008, within the IV Goodman Latino Theatre Festival in Chicago followed by a season at Aguijón Theater headquarters, before a full auditorium and again, with excellent reviews. Aguijón takes all these opportunities to show their work and mission of producing quality theater in the Spanish language and to share with the world a glimpse of the Illinois’ vibrant arts community.

In 2009 Aguijón celebrated its twentieth anniversary, bringing the great writer and Mexican journalist Elena Poniatowska as the guest of honor. The 2009/2010 season, “From the Pages to the Stage” was a project that sought to explore and develop the Latin American literature to take it to the theater. Hence arises “Soldaderas,” original work written by Oswaldo Calderón, Aguijón ensemble member, that was based on an essay that the Mexican writer Elena Poniatowska wrote in 1999, which tells the female role in the Mexican Revolution, without which, according to Poniatowska, it would have been a barren war. “Soldaderas” was performed in English and Spanish, in alternating nights with a fully bilingual cast, and had its world premiere at the V Goodman Latino Theatre Festival, followed by a season at its headquarters. It was also presented, the same year, at the “XXII Women on Stage for the Peace Festival” in Bogotá, Colombia.

In 2012 the company traveled to Cartagena, Colombia to present a dramatic reading of the play “A strange mauve-color corpse” by Cartagena-born playwright Alberto Marín Llerena, as part of its “Caribbean Voices” season in which Aguijón decided to give a further look at the Spanish-speaking Caribbean and explore, through theater, the differences and similarities of people who share such strong cultural and historical connections. This performance was held at the Museum of Modern Art in Cartagena. As part of that season, the world premiere of “Inside,” original work by Cuban playwright Abel González Melo, who came from Madrid invited by the company, took place. The play was performed in English and Spanish. “Voces Caribeñas” closed with “Sadness Knows How to Swim” by Cuban playwright Abelardo Estorino, work that earned praise from audiences and critics, both in Chicago, and in Argentina, where was presented in October 2013 through an invitation to participate in the “IX Theater and Territory Encounter” at the university of General Sarmiento University, both in San Miguel and Buenos Aires. In April and May 2014 it was presented again in Chicago.
In 2014, Aguijón Theater celebrates ist 25th anniversary and keeps growing. The board and the artists that currently make up the company ensemble, with its strong commitment, continue expanding the vision of the company, that continues receiving the support from organizations such as the Arts Council of Chicago, the Department of Chicago Cultural Affairs, National Museum of Mexican Art, Richard Driehaus Foundation, MacArthur Foundation, Chicago Community Trust, Instituto Cervantes of Chicago, Crossroads Foundation, among others. However, the life of the company also depends on the unconditional support of a network of volunteers who believe in its mission, and donate their time and energy to ensure its continued success.